The short version of the story goes a little something like this: Saint Ursula was a Roman-British Princess who, in the 300s, decided she would go on a pan-European pilgrimage. She packed a boat with her 11,000 virginal best friends – which immediately calls to question what kind of boat in the 300s could have fit 11,000 people on it – and the giggling virgins set out for Rome. (One can’t help but wonder how salty sailors would have felt about ferrying thousands of young female virgins about…)

In a miraculous turn of events, a freak storm blew the boat to Rome in a single day, and Ursula convinced the Pope and a few other religious figures to join them on their pilgrimage. Everything was going great until the ladies stopped in Cologne, where they were captured by the Huns – a sort of collective Boogeyman plaguing Europe at the time – and all 11,000 virgins were promptly beheaded and Ursula shot dead.

In 1155 a mass grave was found in Cologne – they had already found some remains claimed to be the virgins, but this was the jackpot – and it was assumed by the Church that this must be the grave site of Ursula and the 11,000 virgins. The church – which was already in honor of St. Ursula – was expanded to make room for the incredible amount martyred virginal bones that it now needed to house.

Known as the Golden Chamber, it is still there today – a massive reliquary filled with dozens of head-busts containing skulls, arm reliquaries, and walls covered in bone. The Chamber’s been described as a “veritable tsunami of ribs, shoulder blades, and femurs… arranged in zigzags and swirls and even in the shapes of Latin words.” The church is overflowing with virginal bones, or with some type of bones anyway.

Most historians as well as the Catholic Church agree that the story of Ursula is probably extremely exaggerated, particularly the number 11,000 – if it’s not entirely false. Among the explanations is that there was indeed an Ursula who was traveling with eleven virgins, who were indeed martyred. This incident was then abbreviated as E.M.V., then misread by an overeager monk as 11,000. Another explanation is that Ursula was traveling with just one virgin who happened to be named Undecimilla, which read as 11,000. It is also possible that this was a story that had been kicking around in pre-Christian form for some time, and Ursula’s was just the latest incarnation.

There is another argument to be made – that the Cologne church came up with the number 11,000 because it meant, for one, that the church would become an even hotter pilgrimage spot than it already was. What’s more, along with the church’s old Roman cemetery, the number 11,000 provided church officials with a nearly endless supply of saints and saintly reliquaries that they could sell for a tidy profit. The entire thing is a sort of early Christian tourist trap, complete with holy tchotchkes.

Of course, if this is the case and there were no 11,000 virgins, whose bones are in the church? Apparently everyone’s – children’s, men’s, and even dogs’. A Cologne surgeon got in hot water with the Church for pointing out that a couple of the head reliquaries contained the skulls, not of virgins, but of large mastiffs.

Regardless of whether the bones are those of martyred virgins or regular Romans who happened to get dug up by eager relic-makers, nothing lessens the amazing look of the church or its fantastic reliquary – where skulls are adorned with garlands and coronets (some even retaining tufts of hair), walls are covered in golden and silver reliquaries, gilded relics abound, and one wall is covered entirely in bone, spelling out the phrase “Holy Ursula, Pray For Us.” It is a truly amazing sight to behold. 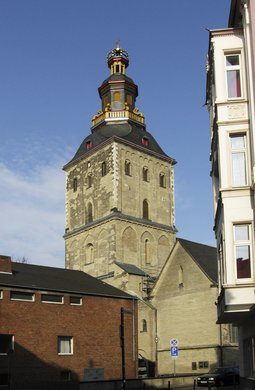 Ursula left her mark in other ways as well. Besides the Order of Ursulines founded in 1535 to teach young girls, the Virgin Islands were named after her and her band of 11,000 martyred virgins.

NEWER POSTGreen Conventions are a reality at darmstadtium
OLDER POSTBerlin Visitors: Don’t get caught by the STASI – why not visit them?